Be a Good Guest

Armed with the information-superhighway, more dependable vehicles and hopefully, more disposable income than our grandparents had, traveling to hunt birds continues to grow in popularity. Whether it is to check off a certain bird from our life-list or just get away from the boss at work or the real boss at home, many of us like to venture into different states.  Beyond buying a license and following the host states' respective rules, there are some other things to keep in mind as well. Some of these suggestions are obvious, some not.

The obvious you have heard before: don’t litter, don’t shoot from the road or from your vehicle, close any gate that you open. Hunters are often blamed for a lot of actions that we don’t commit, so if we can prevent that Taco Bell bag from blowing out of our truck let’s prevent it.  Many landowners ASSUME all hunters are road-hunters, so don’t perpetuate that stereotype by shooting a rooster along their driveway, regardless if you had a rough day.

Ranchers and farmers have also shared with me a few things over the years that bother them, some of which surprised me, some that make perfect sense.

While some ranchers love dogs and have a bunch of their own, it doesn’t mean they want to take care of yours.  Keep your dogs under control when you are around their farmstead, especially when their cow dogs are loose or if they have chickens or pets in a vulnerable area.  One rancher I talked with only allows one dog per hunter, two or three dogs total, on his ground at a time.  Sure, Ben Williams of Hungarian fame has made it vogue to put six or more dogs out, but some folks see that un-sporting.  “What chance does a bird have?” the rancher remarked. I was surprised that it was something that he even noticed. 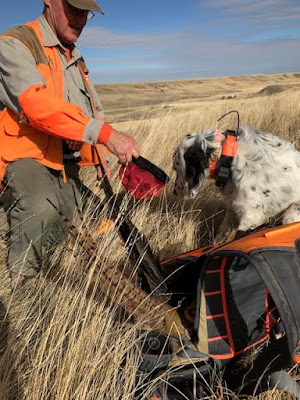 Don’t just close those gates, don’t block them either.  You never know what day the rancher will move cows or need to get at his bales.  Speaking of parking, don’t park in tall grass.  Things are often tinder-dry in late fall and if you knew how fast grass fires can grow, it would give you nightmares.  I have also heard a story about a hunter that lost his vehicle to a grass fire, along with his dog that was getting the afternoon off.  Dreadful.

If in doubt, don’t shoot anywhere close to buildings.  State laws vary on how close you can LEGALLY shoot in regard to occupied buildings or homes, but keep in mind, a farmer in his shop or his spouse working in her flower garden, especially downwind, will not know.  If the report is loud, he or she may think you are shooting the house-covey of Huns and meet you at your truck for a discussion.

Rain, snow = mud.  This is a tricky one, something I have been guilty of a few times as well.  Folks that live in the country have to use those roads on a daily basis.  They would rather we not rut them up, if we can avoid it. There are times when we get caught in something that we didn’t expect and if you travel across three states to hunt, we would rather not sit in the motel room all day watching college football. But, some days we would be better off staying on the pavement.

Lastly, a rancher told me while he butchers his own chickens and shoots a few pheasants every year, he doesn't like seeing bird carcasses or feathers blowing in the wind.  In other words, don't clean birds near roads, Walk-In sign-up boxes or some place where a farm dog could feast on a bunch of sharptail guts.

As access to private lands continues to be important, is it imperative that we do our best to not give landowners any reason to close the gates for good.  The Dakotas, Montana, Kansas and other states have great Walk-In access programs.  But, each year a few of those are lost due to poor behavior. That is a terrible reason to lose a potential new favorite pheasant or sharptail covert.