Quick Trip to the North Woods

It is always advised to never leave birds to find other birds and that is always the trouble with heading out of state from Montana in October.  But, I hadn’t been to MN to hunt ruffed grouse and woodcock since 2012 and my Dad had been reporting “average” bird numbers from his stay in the Northland since early October. Most importantly, my two setter girls were now age eight and ten, so every fall is now even more cherished.
It also helped that I had hunted nearly 20 days already in Montana this season, including blue grouse, sharptail, Huns, sage grouse and pheasants, so I didn’t feel like I was leaving as much behind. In fact, I managed to sneak in an hour pheasant hunt before crossing into the chaos that is the Bakken oil field of North Dakota. It was a memorable, quick hunt as we chased a dozen or so already-ware pheasants around the half-section, combined with one covey of Huns that Abby had nailed in the far corner of the public parcel.
I had picked up my good pal Ryan along the way, so along with his setter and his Griffon, we had ample dog power for just three days in MN.  Again, I was able to make the most out of the final hours of daylight upon arriving in grouse country and was strapping on beeper collars by 3PM. The girls nailed a woodcock, just minutes into the hunt, so they hadn’t forgotten what Timberdoodles smelled like.  We also moved five partridge and I connected on two, one of which sat tightly in a fern-filled clearing, while the dogs moved in very cautiously. An easy shot on ruffs, in an opening, doesn’t happen very often.  I arrived back at the truck at dark, with a sense of peace,  with the pressure already off.  Five birds in a three-hour hunt, with good dog work, made the trip a success two hours into it.  Having older dogs is both a blessing and a curse; they are in their bird hunting prime and hunt at a perfect gait for ruffs, but I also know that their time in the field is coming to an end, sadly. 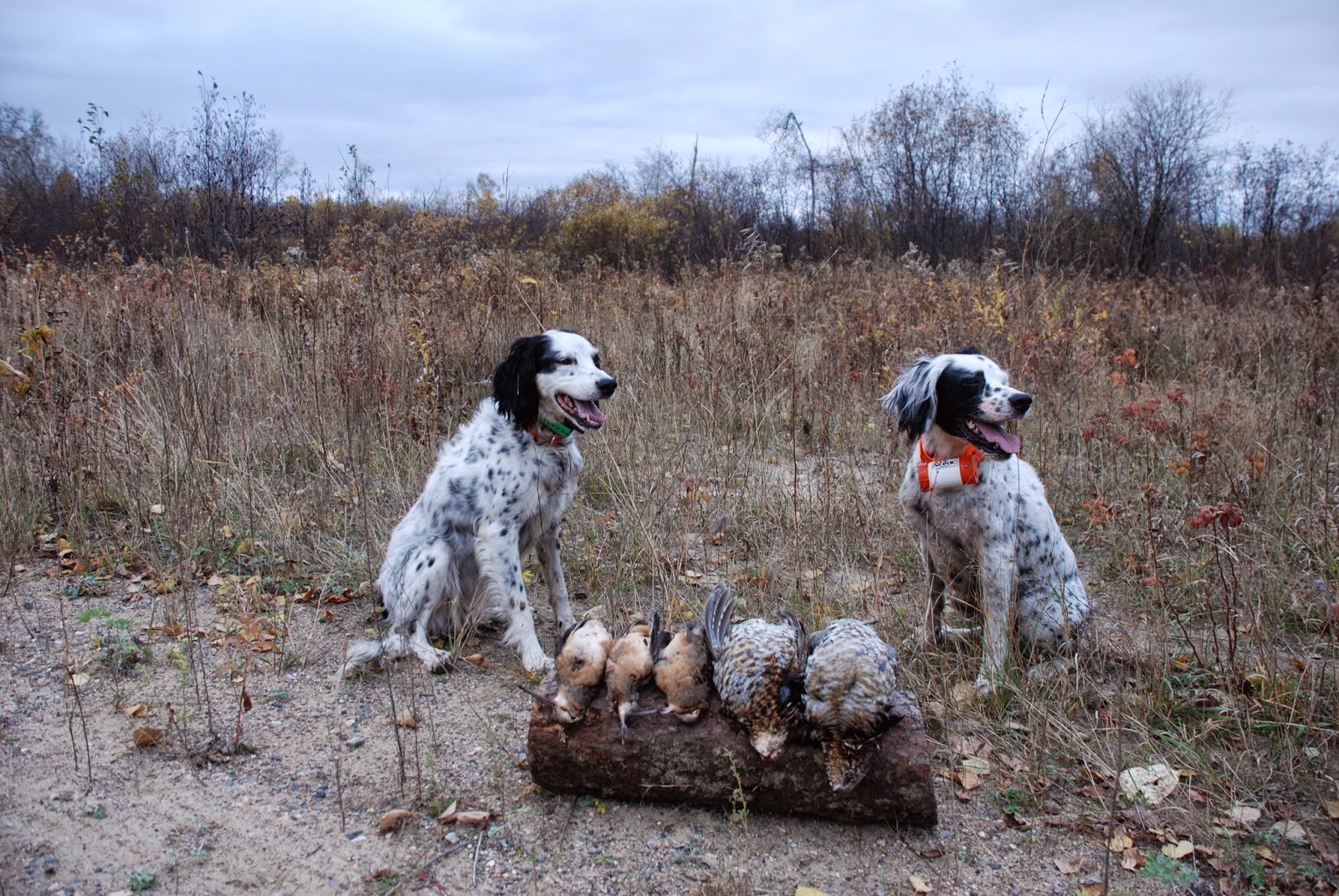 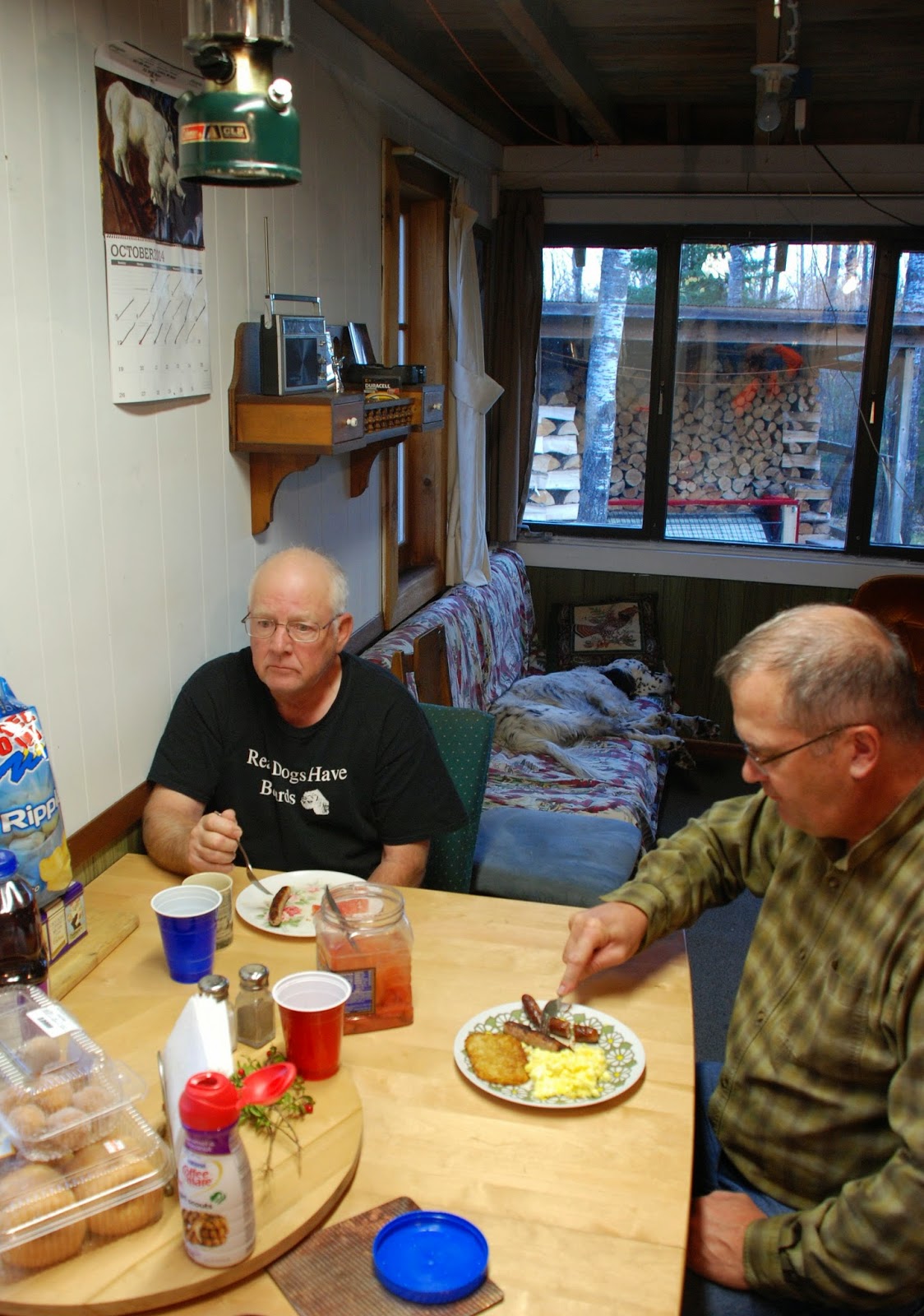 Overall, it was a good trip to Minnesota. Having hunted the area since I was a kid always helps. Some coverts are still productive after all these years, some are too overgrown and new honeyholes are appearing, as well.  The woodcock were more elusive than expected and Dad felt their numbers may have peaked in early October.  The grouse are still in the trough of their 10-year-cycle, but were definitely in huntable numbers.  Ryan and I returned to the Big Sky State with our two-day possession limits after three days of hunting, so we couldn’t complain that the birds were down too much.  There were a few woodticks around, but the mosquitos were gone, which is always a plus.  Dad and I didn’t get to hunt  together as much as I would have liked this trip, but with other guests in grouse camp and a total of ten dogs included, sometimes arrangements get complicated.

Some random thoughts from the trip:
We saw fewer people “road hunting” from trucks, but the number of folks driving ATVS EVERYWHERE was disappointing. We encountered one slob that ignored a road-closed sign and when I yelled at him, he explained that it was closed unfairly and didn’t care.
We timed the leaves perfectly; the woodcock we may have missed by a week or so.
I won’t travel to MN again during the annual teacher’s association break. The long weekend is always the busiest in the woods.
I didn’t take enough photos this trip.  I did spend a lot of time wearing my GoPro, but only ended up with a few decent videos. The brush is thick enough to crawl through as it is, without that darn thing on my head.
We brought plenty of food.  Too much.
The older the guests are at the cabin, the more valuable ear plugs are to help drown out the snoring. 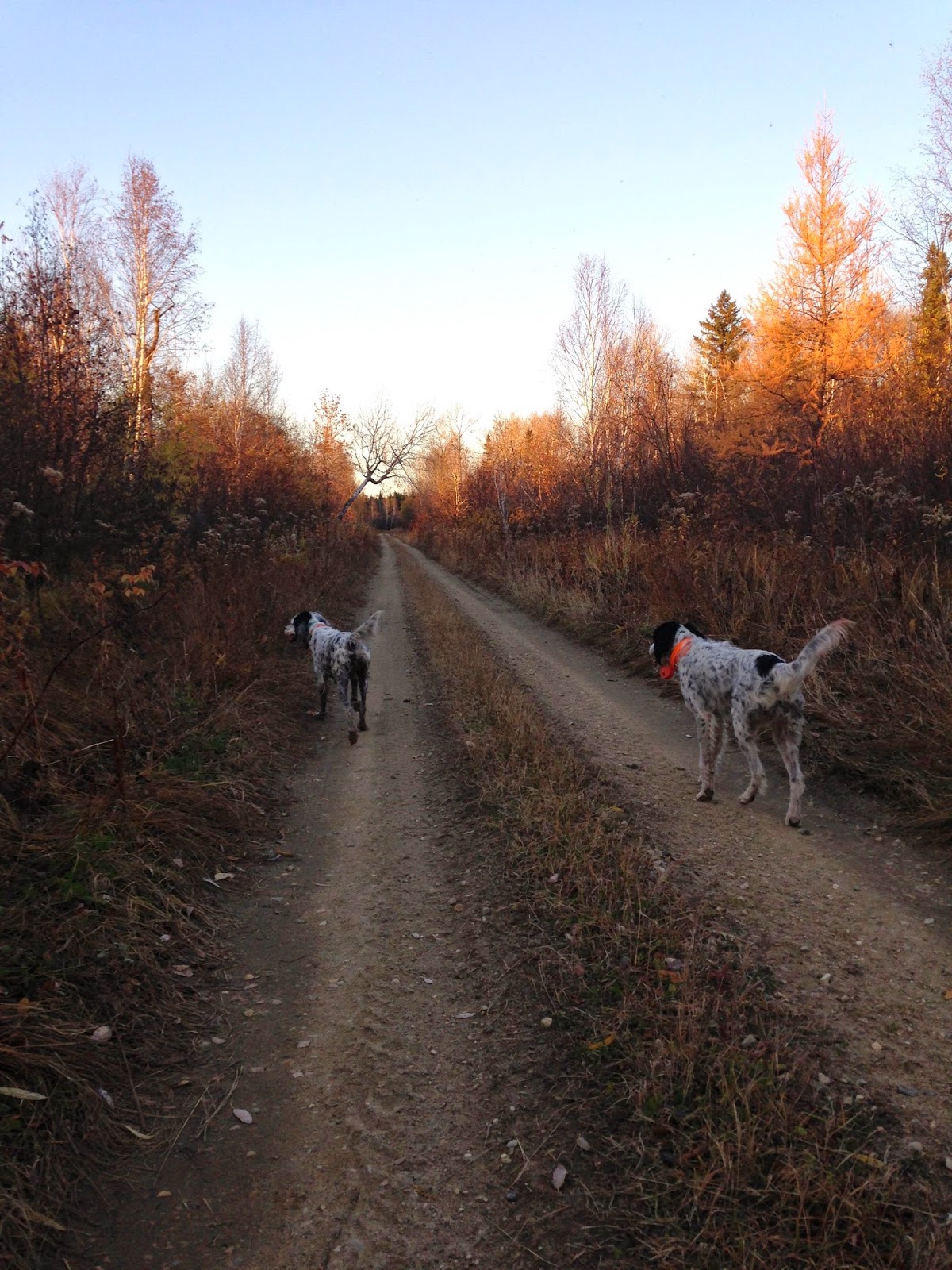 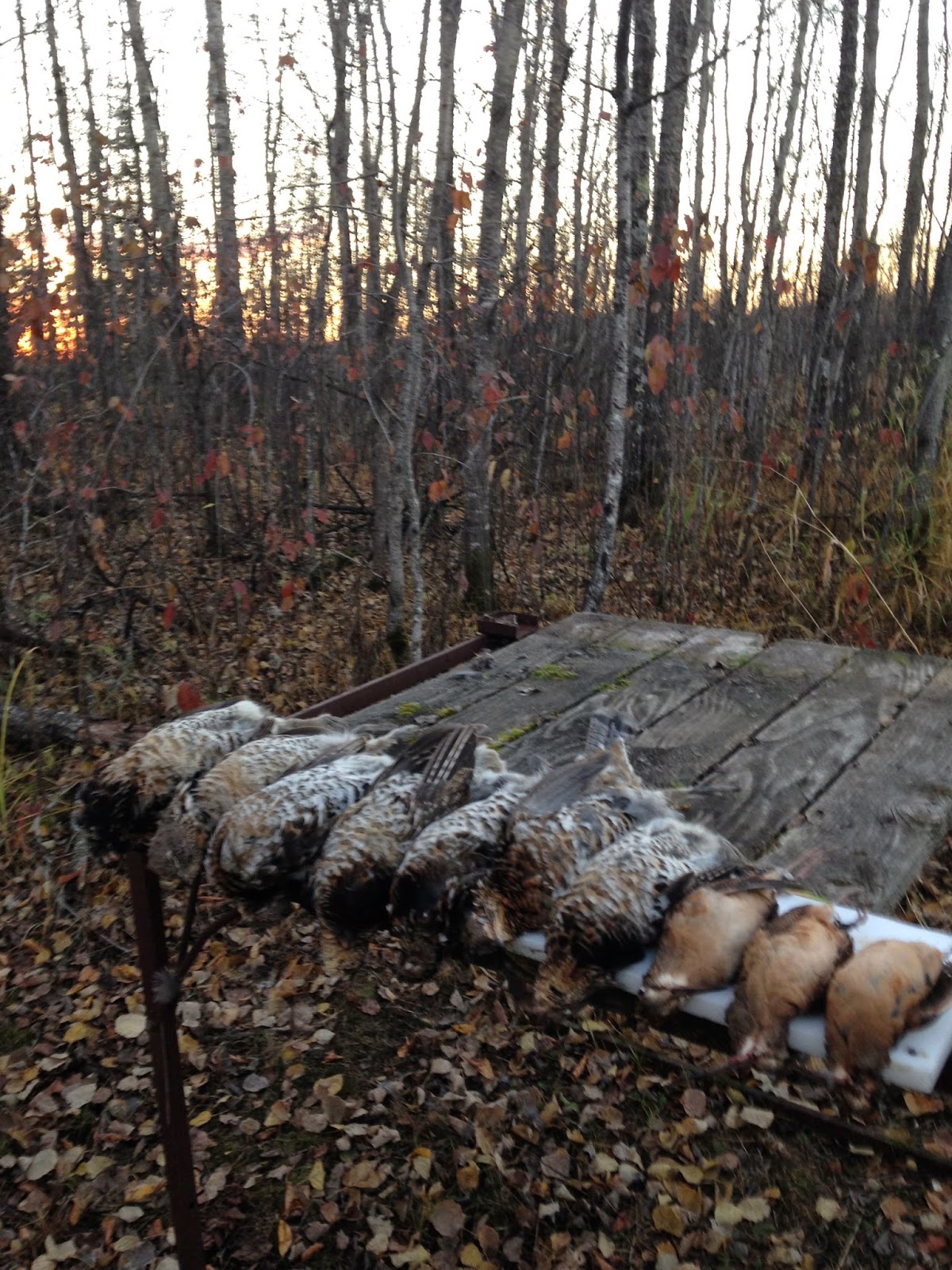 Posted by Hanson at 9:40 AM No comments:

I awoke in eastern Montana, three days into a sharptail and Hungarian safari, and I knew I had different work to do this day. It was the final day of the new, more-restricted, sage grouse season in Montana.  For most of us bird hunters, we don't make a living shooting sage grouse.  The most birds I have shot in a season the past five years was two males, and that was only because I had seen three large flocks of the native birds that October day. But, now the dialogue has changed. Dramatically. In fact, Montana FWP had originally proposed canceling the season completely this fall before introducing a 30-day hunt, with hunting also limited to certain counties.  (I will discuss the politics and biology topic of sage grouse hunting in a later post.  In a nutshell, I agree with a conservative, very restrictive season (one or two birds annually???), but a complete closure is a knee-jerk, political response.)

So, my mission was obvious. I would head back west until I reached one of the counties that was open to greater sage grouse hunting.  My MO when hunting the big "boomers" is pretty standard: find a large   sage flat, with sage brush that is tall enough to hide birds, and partially hide the white setter dogs that are looking for them.  Then I walk. And walk some more. Some folks feel they do better when hunting close to water or when sneaking on the birds in a coulee, amidst a flat.  This parcel today contained both attributes, although they really didn't play a factor in the game plan. 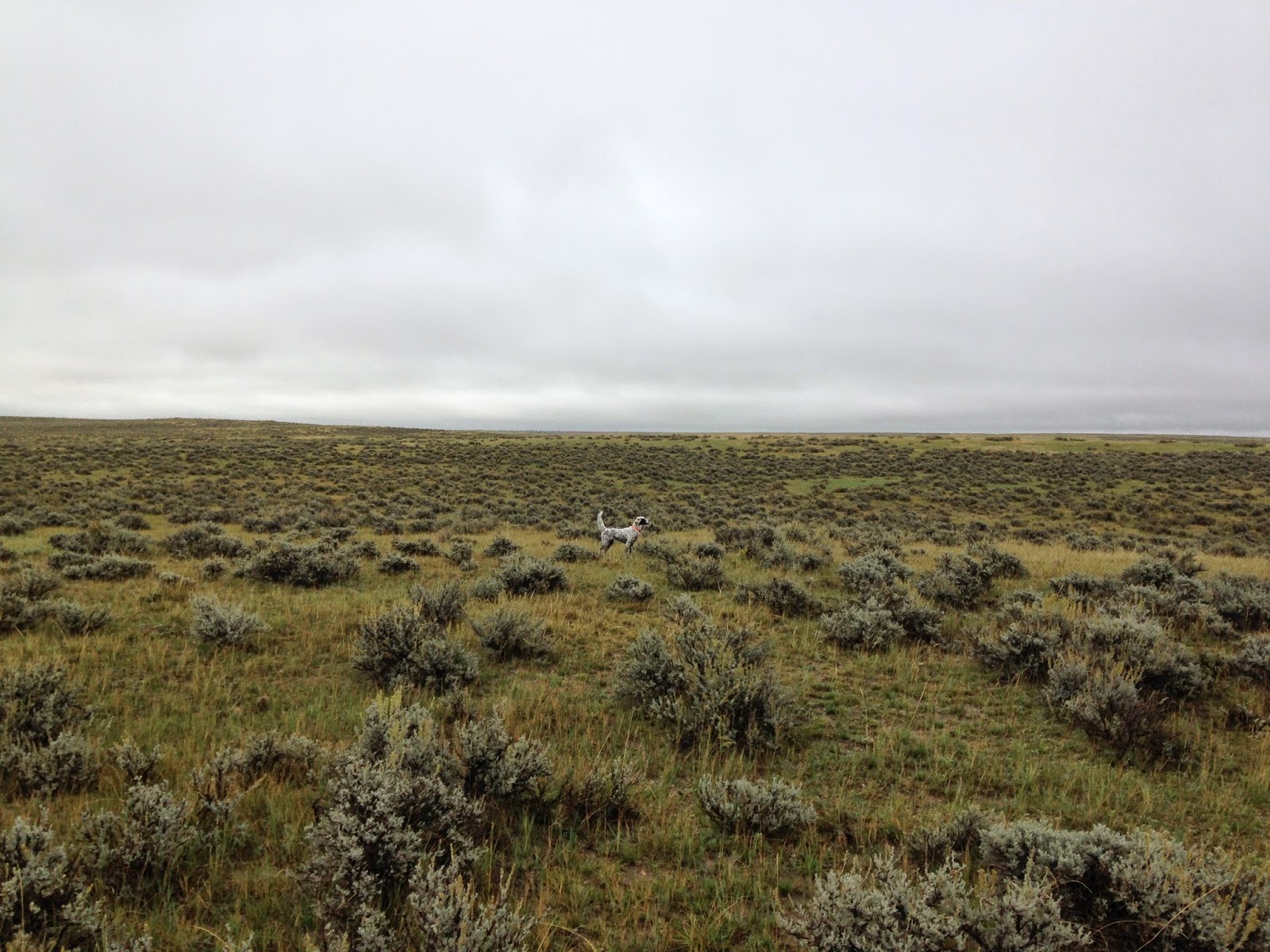 The first point of the day, resulted in a meadowlark, which made me pause for a millisecond.  But, just a few minutes later, the dogs were locked, and began to creep, which is typical for scenting running birds.  I tried to hustle into place, but a dozen or so sage "hens" flushed wild.  I was a bit disappointed in my lagging behind, but had an idea of the direction they flew.  When the dogs became birdy again, I picked up my pace, but to no avail. They again flushed out of ethical gun range. Since I hadn't planned on hunting this majestic bird when I left home three days previous, I was content just packing my 28 gauge. So, while I had  enough firepower for Huns and sharpies, the Ruger was a bit on the light side for 4 pound sage grouse.
The chase continued for another hour.  In a straight line, into the wind.  The day was cool and damp, with a light mist/rain, so scenting was perfect for the dogs. I could have done without the heavy gumbo accumulating on my boots, however.
Finally, on the fourth flush, I felt good about a shot on a straggler. It was still a 40-yard shot, but I connected and Abby was there to grab the bird before it was able to hide or walk away.  It was such bittersweet event.  I was very proud of my two, veteran female setters, who simply did their job perfectly.  The hunt took place on public land and I never saw another human until I returned to the paved highway.  Unfortunately, I knew that this might be my final sage grouse hunt forever. Forever. That is pretty powerful.  As most of us would attest, we aren't players in this game for the shooting, the killing. We simply appreciate this part of our sporting legacy, of hunting a native bird, in big, open country, just as settlers did 200 years ago.  I hope I am repeating this same story next fall, but if not, I will relive this final sage grouse hunt until eternity. 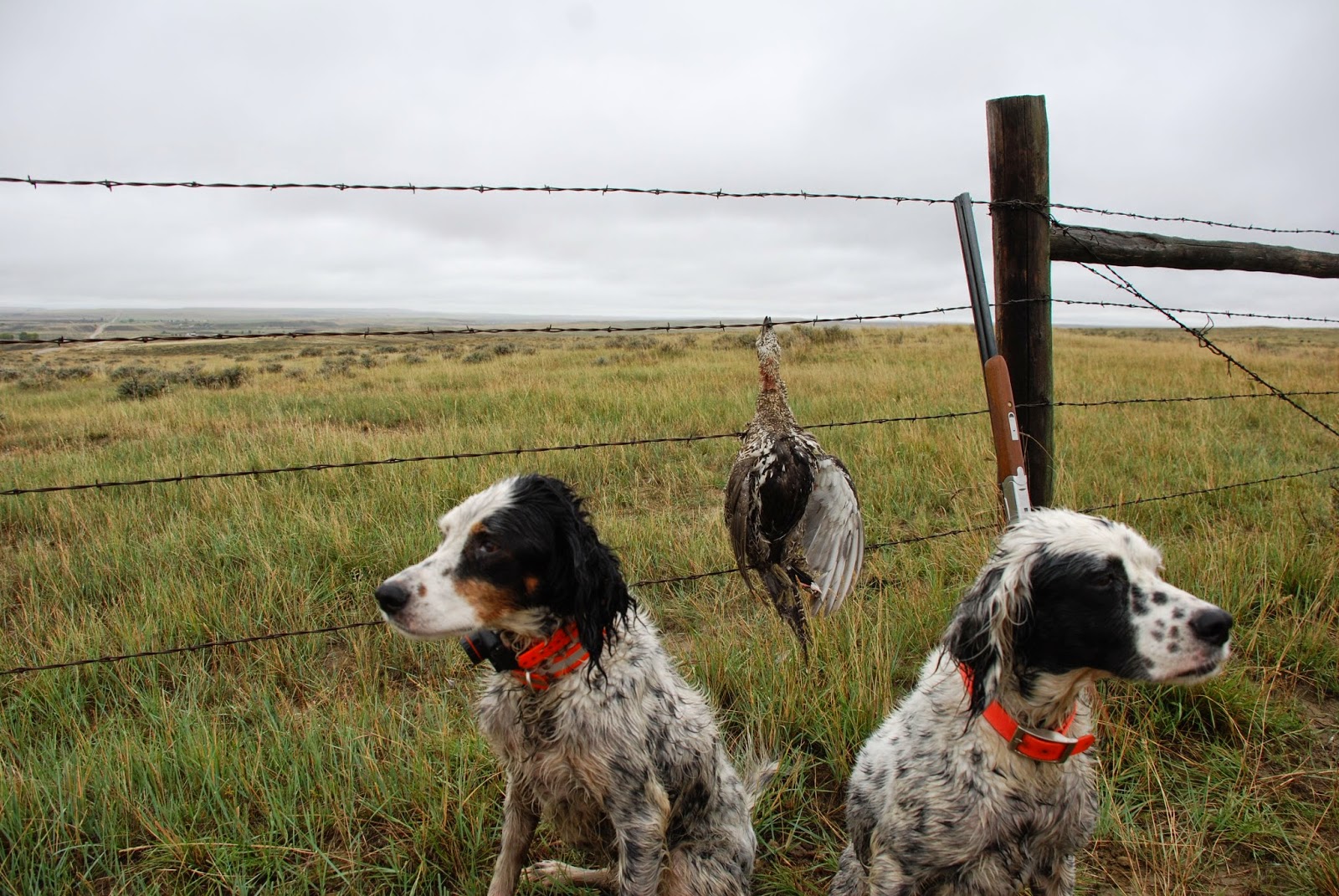 Posted by Hanson at 4:34 PM No comments: