Having only had a half-dozen chukar hunts under my belt, I am still learning each time I leave Montana for chukar country.  Some of that learning is painful, some of it is just relearning things I should know from 30 years of wingshooting. 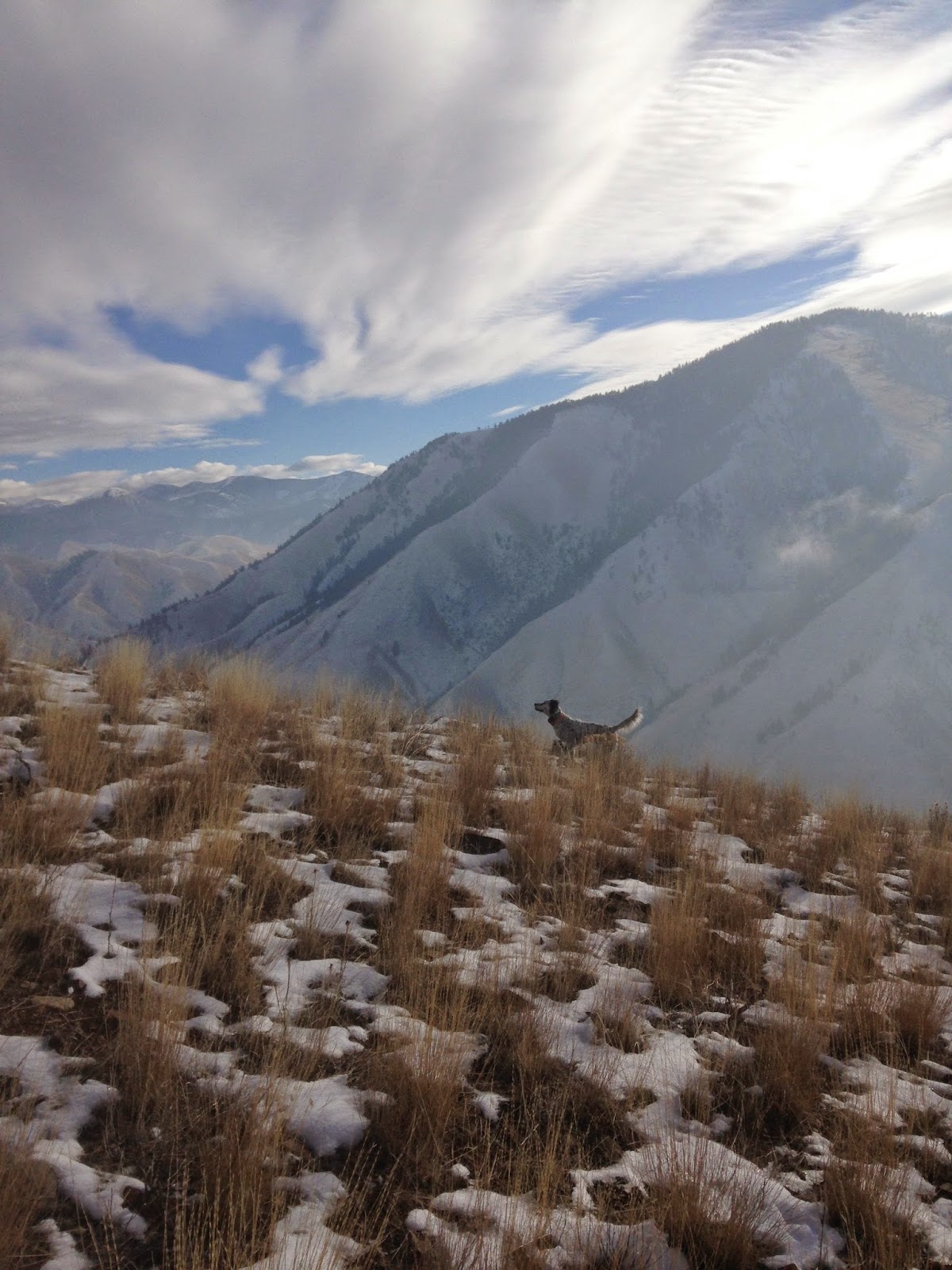 Winter driving. I knew I had to get over three mountain passes on my trip west.  I knew they were ice-covered. And two of the three were. This really wasn't learning any lessons, but strictly a reminder that we are now in winter travel mode. Mix bad roads with darkness and deer and elk on the road and I was glad to have arrived at my motel.

Dog paws.  No matter how much I hunt in Montana from September 1 until chukar time, there is no way to get the dogs' paws conditioned.  In fact, I am writing this blog entry in a motel room, when I should be hunting.  Yesterday's 8A.M. to 3P.M. shift on rock and ice, took its toll.  I could have rotated one dog midday, but I knew I would be gone from the truck too long. Now Abby needs to be carried outside to do her business and Tess isn't much better. I am hoping a day of rest and the addition of dog boots, which I have never had success with, will get us through Sunday.

My feet.  Even though I was hunting south-facing slopes, I still had a good deal of snow and ice to deal with.  Shame on me for not trying a newer pair of books on snow before strapping them on hundreds of miles from home. It seems like that every so often, I get a pair of boots where the soles are super-slick on snow, despite appearing to have an aggressive sole. These were one of those #$%&*!@ pairs.  My frustration was nearly comical at one point.  If the landscape had any slope to it, and it did, it was as if I was standing on ball bearings.  In 7 hours, I probably fell ten times.  I had another pair of boots in the Toyota, but I was too stubborn to give up my precious elevation that I had gained. Also had packed some ice-cleats, but they were also in the car. 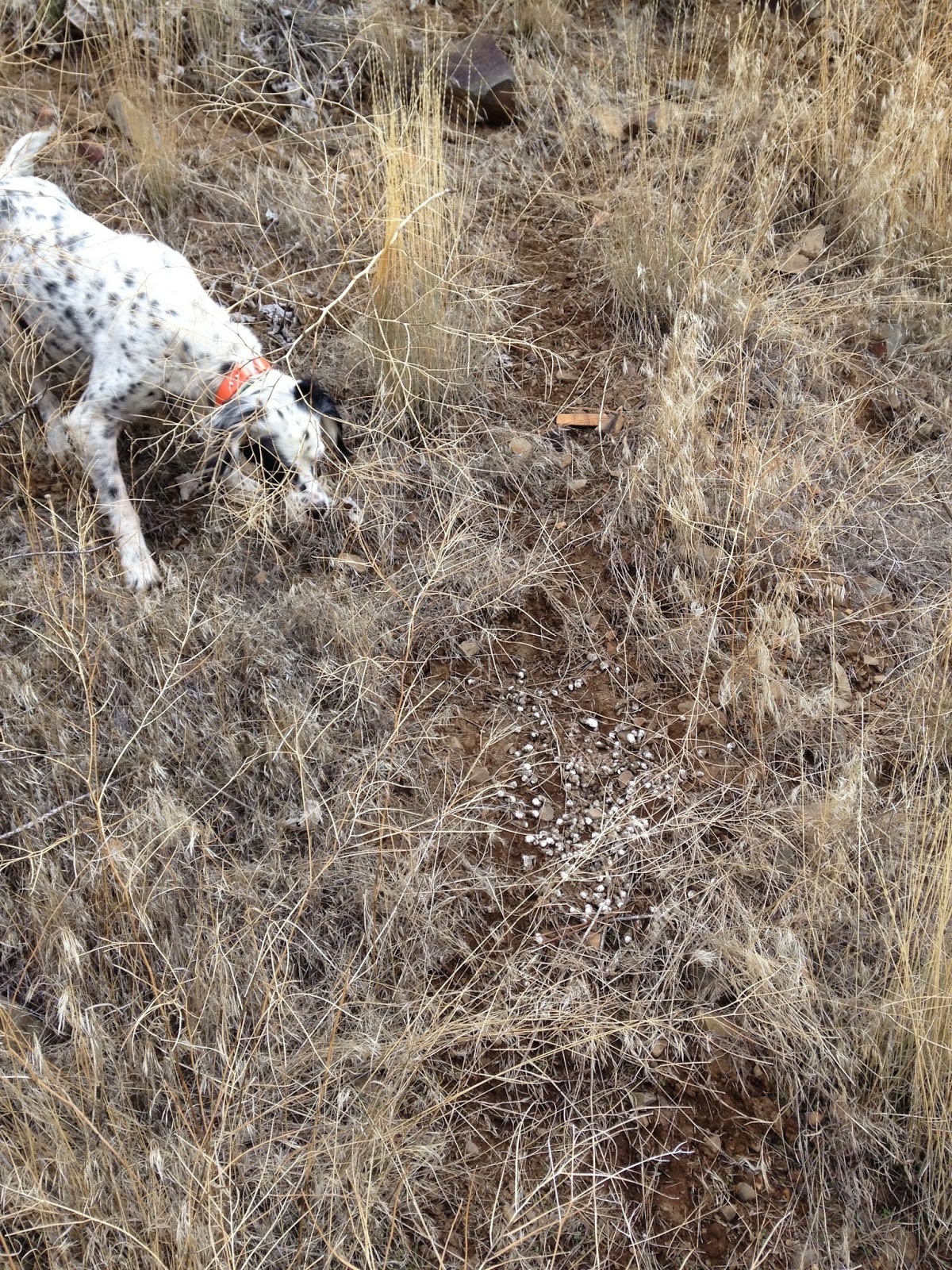 Shells.  I had been lulled into my normal Montana routine of grabbing 12-15 shells in the morning and restocking at noon. That is plenty for a three-bird pheasant limit. Not chukars, for Pete's sake. I finished my hike with one shell in the hole. Dumb.  Running out of shells should be a good thing. See the following paragraph.

Shooting.   I shot horribly.  Wasted shells on long shots, when the birds were getting up just beyond my 28 gauge comfort.  I also admit to flock shooting more than once.  Why?  I have hunted Huns enough to usually be the know-it-all to tell others that their frustrations probably stem from flock shooting. For some reason on this hunt, I had a heck of a time picking out one chukar.

Enough of the whining.  I hunted behind my setters in beautiful country, saw plenty of chukars and one covey of Huns.  Saw elk, mule deer and bighorns.  It wasn't a perfect day, but it was still pretty darn good. 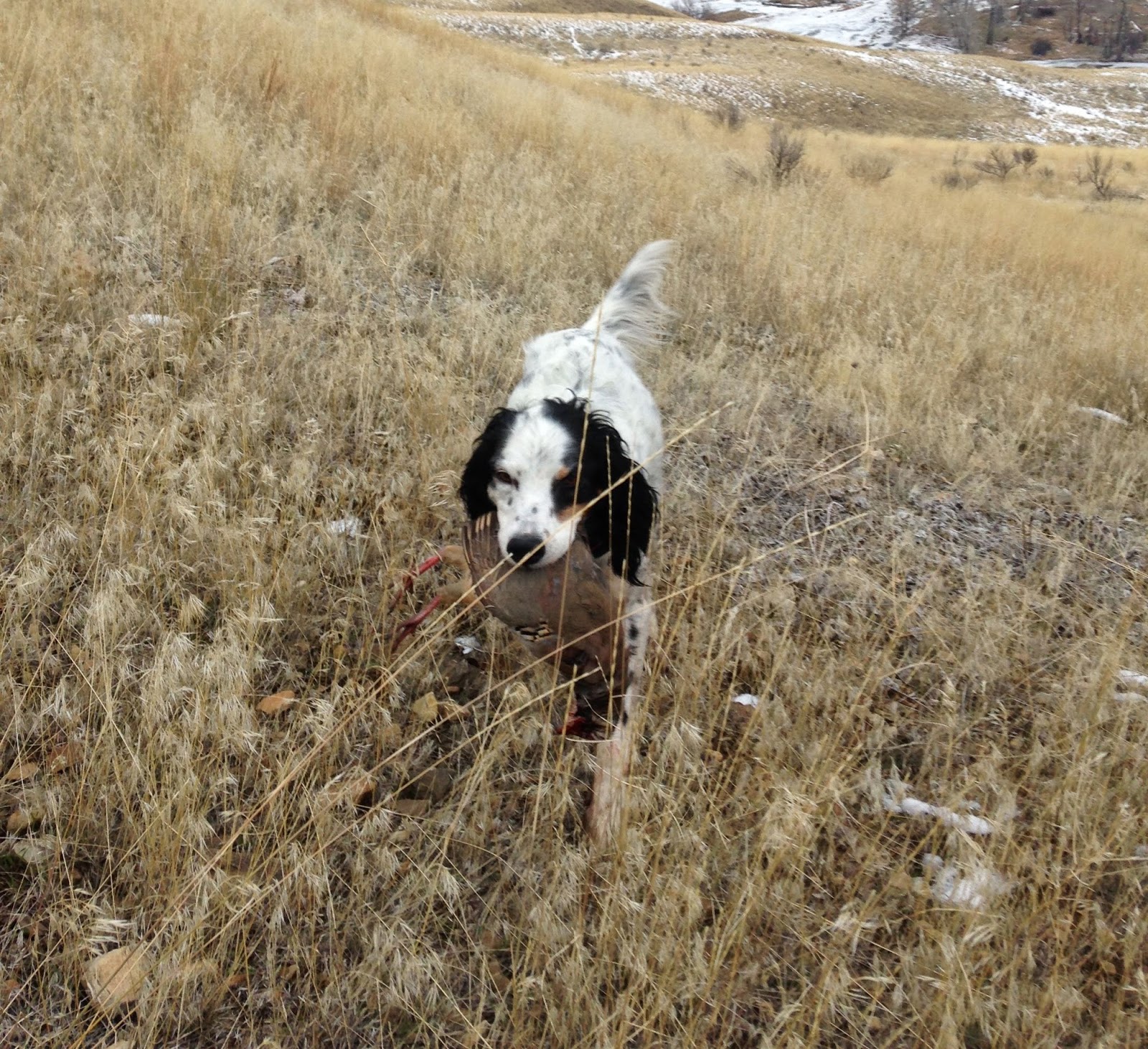 Posted by Hanson at 9:20 PM No comments:

Having always lived in the northern tier of states, around Halloween is typically when the weather is apt to catch you off guard in regard to one's outdoor pursuits. Seems like just yesterday, I was carrying a gallon of water for the dogs, trying to catch sharptail midday under the shade of Russian Olives and buffalo berry bushes.  Birds were gutted immediately and placed in the bird tray (isn't that why cooler companies give you that clunky, rack that is often in the way?) of the ice chest. 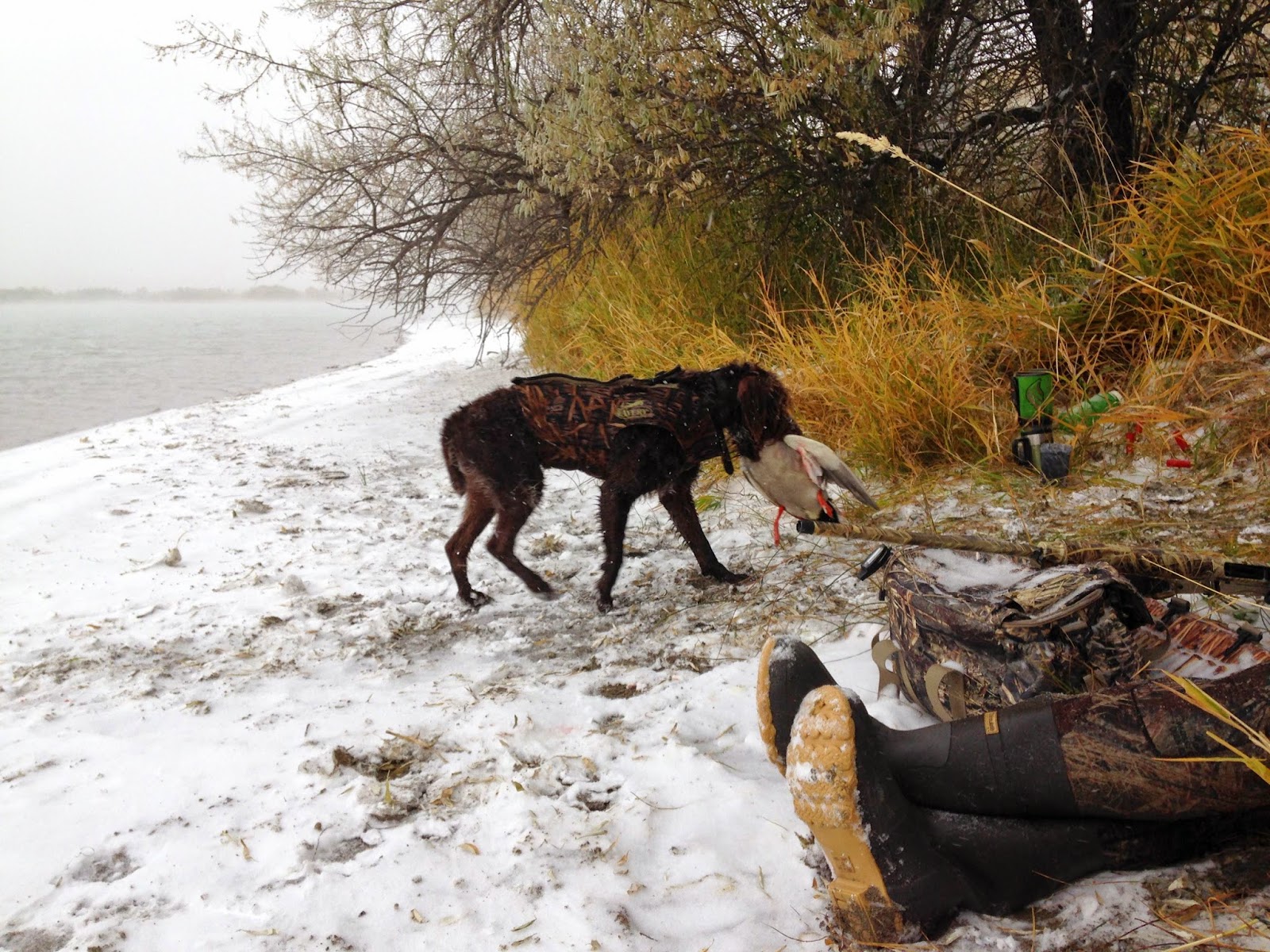 Just like that the days are now kaput at 4:30PM and and the mornings are cold, not cool.  I have never been a guy that is keen to shooting gloves, but now gloves are a must, just to keep the fingers in working condition at 15 degrees.  Hunting pressure has already diminished from the chaotic pheasant opener and the southern dog trainers that show in Montana in August, have headed south like waterfowl, worried that the cold weather will stiffen up their grits.  Whatever they are. 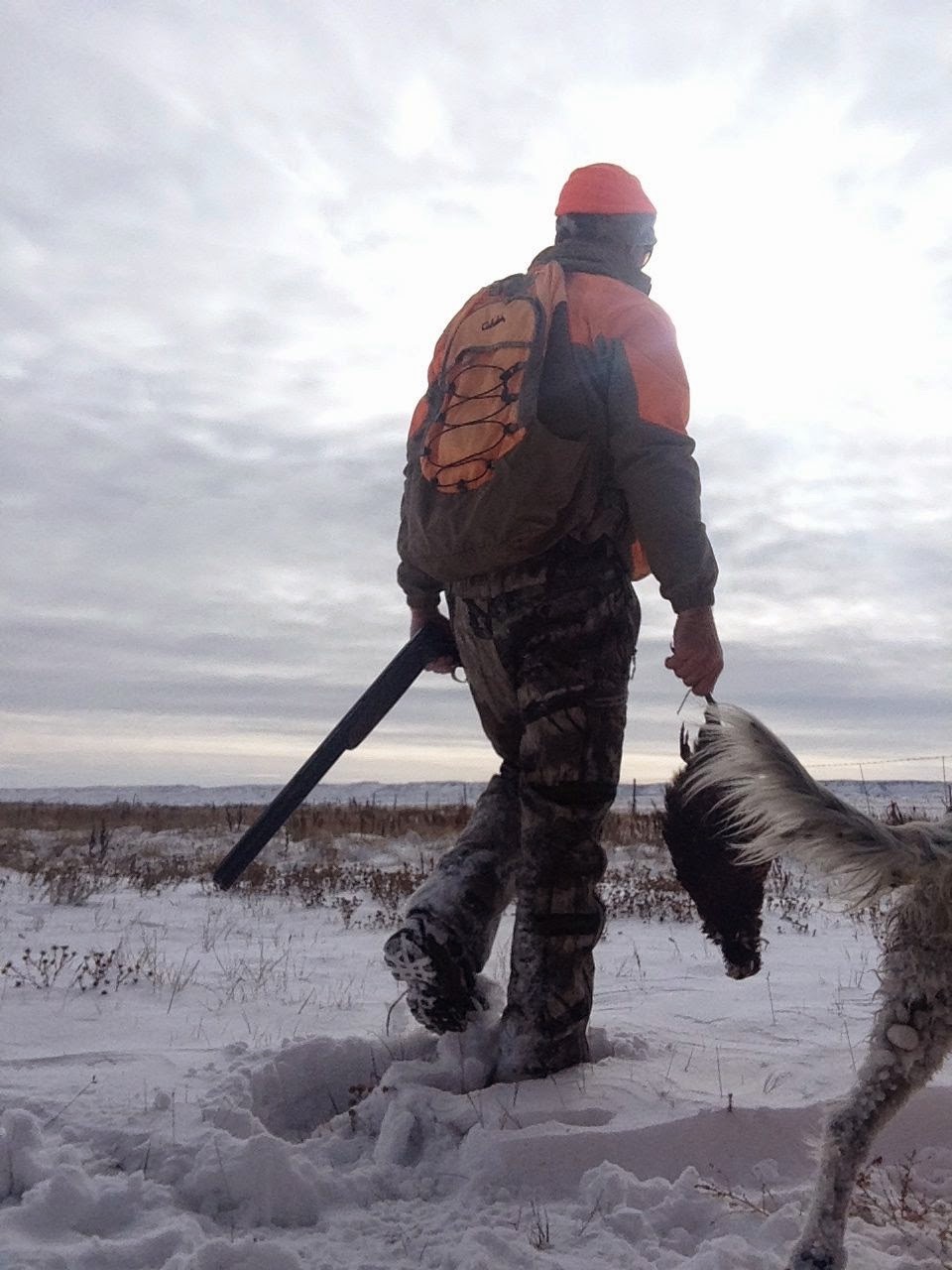 This past episode, just a week past the Halloween threshold,  we even mixed in some duck hunting, thanks to Ryan's griff, Kruz, who retrieved our  mallards and redheads. Timing the major cold front, which used to be a called an Alberta Clipper, but now goes by the moniker of Polar Vortex, geese and ducks were showing up in impressive numbers.   Of course we hunted some pheasants and sharptail, to give the setters some action too.  We hated to even take a lunch break, since the daylight was as precious as our appetites.  The first pheasant hunt after the snow always seems to catch the roosters off-guard too, as a few more birds decide to choose door #1(sit tight) vs. door #2 (run like heck until I run out of cover).  We paid the price as our three-hour drives home, took us five hours, due to the snow and ice-covered roads.  Maybe those southern boys are smarter than we are. 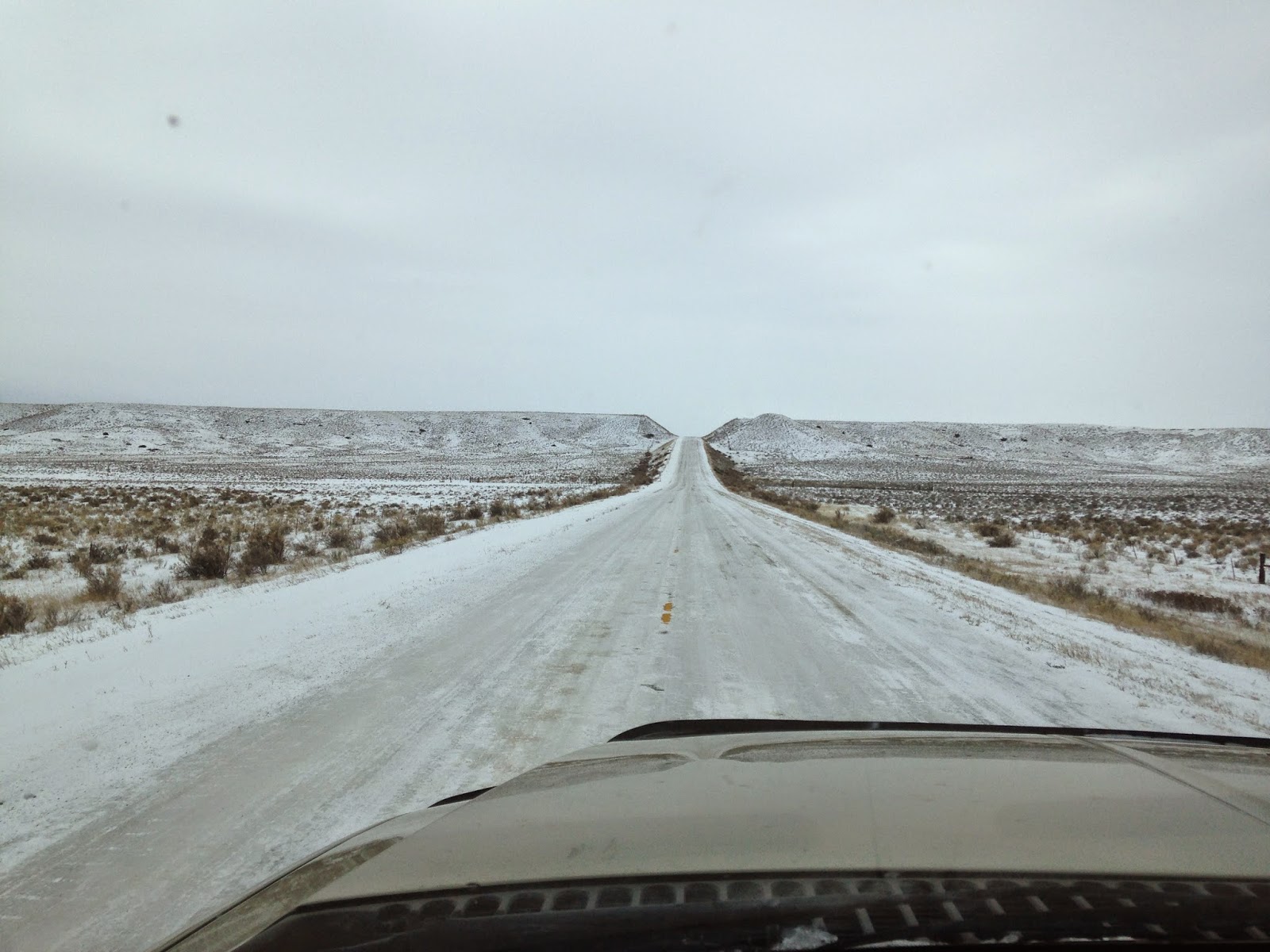 Posted by Hanson at 6:58 PM No comments: