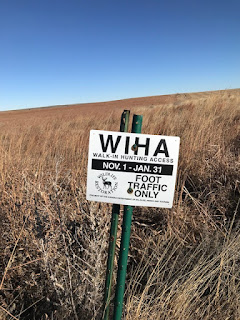 Our  secondary goal was to only spend money in towns with less than 5,000 people.  In Montana, Wyoming, Nebraska and Kansas, it is fairly easy to do.  The primary goal was to hunt wild bobwhites on public lands or state-sponsored Walk-In parcels of private land. The latter goal of putting young dogs on birds was much more important than the former, but both are closely linked to making a road trip enjoyable.

While gas is typically more expensive in a one-pump town, we found gas to be more economical in Broadus, Montana than in the energy hub of Gillette, Wyoming.  Go figure.  Sure, taxes are a big part of petrol, but it really doesn’t make sense. Gas prices ranged from $2.79 to $2.05.   $2 a gallon is almost bearable, even in the GMC truck that guzzles gas like college guys drink free keg beer. Not spending any money on motels offset the higher fuel expense.  The nightly pet fees were one of the final straws when deciding to camp instead of looking for the nearest Motel 6. Leaving dogs in a truck in a strange parking lot was never an option in my book.

I justify food costs by stating that you have to eat wherever you are.  With the new pickup camper, I always have the fridge and stove within walking distance, so I seem to be eating more home-cooked eggs for breakfast, followed by gourmet hot dogs at lunch. One thing I really look forward to on out-of-state adventures is dining out with the locals in these small burgs.  The folks are closer in dress and beliefs than what I would encounter in Omaha, Denver or Kansas City.  They know we are visiting from “down the road a spell”, so they inquire, wanting to know our story.  When the answer to the question is Montana, they aren’t often offended, usually surprised we left good hunting to find good hunting. If they still don’t believe our rationale, then we just explain that we are trying to avoid our wives and then they give us that smirk of acceptance. A couple of things I have learned about these cafés over the years are: 1) don’t order seafood no matter what the special is 2) the farther south you go, the better the Mexican food is (thanks Captain Obvious) 3) don’t assume they take debit cards. Cash is still king in small towns. 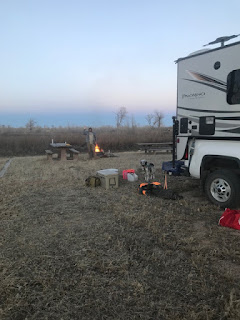 The hunting wasn’t bad on this December journey.  However, Day One was a complete loss, as winds gusted from 35 – 55 mph all day.  Typically on a road trip, 20-30MPH is manageable, as you are fairly pressured to get out in the field. Not ideal, but a little windburn never hurt.  55mph is impossible, no matter how tough you think you are.  Even scouting Nebraska and Kansas Walk-In areas by vehicle was tough. Dust was blowing, birds weren’t showing. Good thing for XM radio and good coffee. 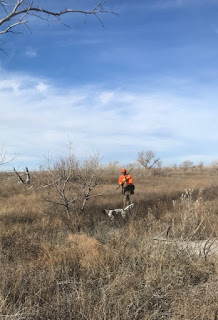 We did get into bobs right off the bat on Day Two. They were dug into heavy cover early in the morning, clearly haven taken refuge from the previous day’s hurricane-force blasts. The coveys we saw were all large and healthy and sat tight for the young setters.  By avoiding the same dreaded population centers, we seldom saw another hunter.  We never did see another blaze-clad person afield, only a few driving the highways, pulling their Jones Trailers from their motel to a nearby field.
The dog work was good, shooting was mediocre, the small town living in the flyover states couldn’t be better. 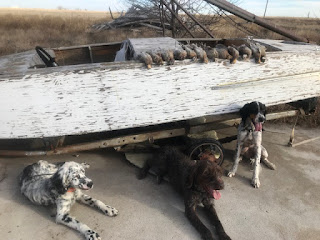