I had been planning a road trip out of Montana the second weekend in December, looking to hunt chukars in either Oregon, Idaho or an even more distant Nevada.  As is often the case in December and January, a large winter storm can change plans quickly. But, for us stubborn bird hunters that cannot get enough, I had to find an alternative plan to heading west.  Hunting in cold and snow is one thing, but 8 hours on icy roads is another.


All autumn, I had read good reports of quail in Kansas, Oklahoma and Texas and when I looked at the forecast, the temperatures in Kansas were in the fifties for the duration of my five day weekend. I dreaded a 1,000 mile trip to hunt three days, but once again, I dedicated my mission to two old setters that deserved to hunt somewhere.  Mileage, motels, gas and a nonresident license all add up quickly, but no one knows what next season brings for birds, dogs and us.

I still managed to find icy roads in both Montana and Wyoming, so I didn't complete the journey in one day.  But, I knew my aging dogs would limit my time in the field anyway, so getting a later start that first day, wasn't too alarming.  With the beauty of technology, I was able to order my Kansas hunting license and download the Walk In hunting atlas to my Iphone, all why driving through busy Denver traffic. (Just kidding. I did it in my motel that evening. But, Denver traffic was horrible. And the Kansas Walk In map app is awesome) By, 9AM Saturday morning, I was hunting in a shirt and without gloves, while my friends back home were shoveling snow off their sidewalks. 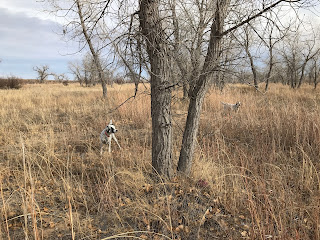 I missed the first chance at quail due to a terrible case of anxiousness.  Both barrels were emptied to no avail.  But, my entire trip was made just a few minutes later, as I shot a double over my 12 year-old Tess, when the birds decided to sit tight and even fly my direction.  I gave Tess a quick hug and took the five-ounce bird from her jaws and had Abby find the second.  It was a great start to a trip that was fairly ad-libbed.

My assumption on how this trip would unfold,  would be to find some pheasants scattered amidst the private lands open to public, walk-in hunting. I assumed I would find an occasional covey of bobwhite if I burnt enough boot leather.  I was hoping to add the bird to my life list, as I had only shot Mearns quail roughly 15 years earlier.   As it turned out, this would end up being a bobwhite hunt first, with pheasants more of a ancillary discovery.

I shot very poorly, but it was often a case of the yips, combined with the excitement of abundant coveys  and good dog work.  Once I decided to focus on quail instead of pheasants, I left my 20 gauge in the truck, dumped 28 gauge shells in my vest and shot markedly better with the lighter, faster over-under.

The hunting and the terrain was very gentlemanly, just like I had read for years in the high-society sporting magazines. While my setters were in good shape for their age, the Kansas terrain benefitted them greatly compared to the chukar hills of the West.  I had never imagine that I would be able to cough up enough cash to have a southern plantation hunt, so to find huntable, wild bobwhite populations on land open to the public, was a very pleasant surprise.  My truck odometer and bank account both took a serious hit, but the odds of returning to Kansas in the future, when Mother Nature is unfriendly in the northern latitudes, are very good.  Long live bobwhite quail. 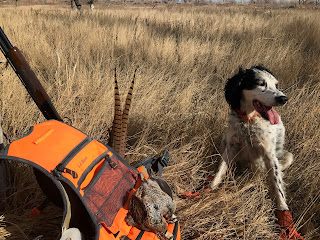