Sometimes We Just Need To Hit The Road 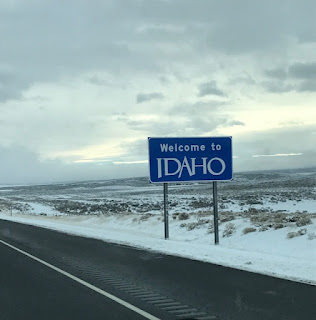 I tried to convince someone to join me on my next sojourn across the West. But, I didn't try too hard.  Dad was offered first, but as he ages he doesn't enjoy strange motel beds or long drives.  It is unfortunate, as he has the young pup that could use the experience. Also,  Dad and I have the good fortune of sharing many memorable trips together whether it was on his first chukars just a few years ago or my first pheasant decades ago.

Other folks I invited had commitments.  Some seemed justified, some seemed lame, at least in my eyes.  Regardless, twisting someone's arm to go hunting is never a good thing.  Most of all, I really enjoy solo road trips to clear the mind and see new country.

The obvious benefit about traveling alone is being 100% in control. You can eat at the same greasy spoon three meals in a row if you choose, your sleep revolves around your schedule not around unwanted snoring and there is no one to fight over the satellite radio stations.  Most folks I know would want to put up with my unorthodox mix of Garth Brooks, the NHL network, Studio 54 Radio and the BBC.

Absolute quiet is also good therapy at times. Driving across the flyover states is often quite mindless. Just a man and his thoughts. I keep a small notepad handy as I expand on my to-do list which usually includes mundane tasks around the house that have been neglected due to the bird season which began September 1st. That list may or may not include such duties as splitting kindling for the wood stove and spending time with my wife. The only time I really lack a co-pilot is when I am tiring from driving at night. Or when I pull up to the gas pump.  "I got this one," I enjoy saying to myself.

Many of us admit that as we age and become more set in our ways, we would rather hunt alone than hunt with someone who we clash with.  Those we avoid includes cheapskates, spot-stealers, slow-walkers , drunkards and shoot-low-over-the-dog types. I also like to hunt alone for their benefit.  While hunting tried-and-true coverts is practical, exploring new territory is half of the adventure. But, with that reward of finding a hidden pheasant slough or Hun homestead, comes a lot of empty miles and hours lost. If I am alone, I only feel bad for the tired dogs, not myself.  I recently took a co-worker chukar hunting to the Idaho-Oregon border country, some of the roughest country around.  After a long drive on icy roads, thousands of feet of elevation gained each day hiking and very few shots fired, he readily accepted the offer of an early exit home on day three.  I enjoyed seeing new ground, habitat that was bordering on too steep for hunters and too dangerous.  But, we did see chukars, so I will be back. 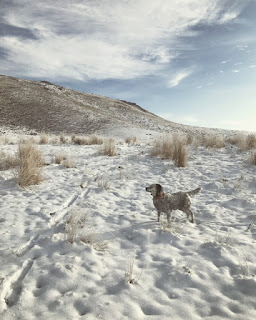 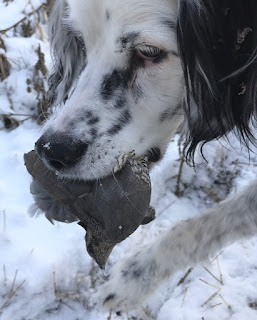 I recently departed Montana over the holidays for an area void of snow, seven hours away and with only a 13-year-old setter with lymphoma in tow.  My immediate family gave me that cock of the head that said, "What? Why?"   But, most fellow bird hunters know why.  The off-season is long, dogs don't live long enough and sometimes, maybe 1 out of 4, the open road to new country leads us to that bit of heaven that we yearn for. It was the final road trip for my setter girl Tess and seeing her do her thing one last time was something you cannot put a price tag on. She ate mostly table scraps, slept  in bed with me each night and rode in the truck seat next to me.  I drove on icy roads most of the way home, but I would do it all over again. 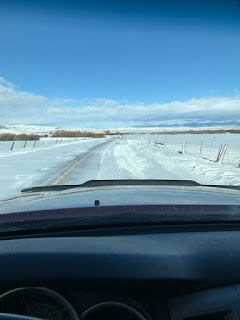