Halloween Is A Little Spooky


Growing up a stone’s throw from the border – Canada, not Mexico, Halloween was always the sad finish line to our upland season.  The weather always seemed to turn about that time, bringing snow and cold, sending the woodcock south if they hadn’t departed for unfrozen dirt already.  Deer hunting also took over then, so just like that, we switched from The World Series and Reeboks to things like Hockey Night in Canada and Sorel boots.
Living in Montana and having the means to travel, Halloween is now about midway in my bird hunting adventures. When you consider possible winter storms and white-knuckle travel, it might be a glass half empty though.  There is a trip to Kansas for quail in my future and hopefully a number of chukar trips west, as well.  I haven’t given up on Montana, either.  Late-season pheasant and Hun hunting can be solid, right until the closing bell on January 1. However, if we receive white stuff that can be measured in feet instead of inches, then checkmate, birds.
So far, the 2019 season has been fair to good.

The blue grouse numbers in September were about average, but slightly better than last season. The birds were really scattered, some dining on berries, others on hoppers.  Good for them to have options. Unfortunately, the season was over before it started, due to early snow (do I say that every year?).  Found some beautiful, new blue grouse ridges in Wyoming this fall.   Some of which you can drive to. Note to older self, when my knees are out of grease.
Montana pheasants had a great hatch it seems.  I have found birds in the usual pockets from central Montana to North Dakota. If only CRP came back…….
Huns are still fairly scarce throughout Montana.  Maybe a covey a day. Sharptail are doing just fine, they have been here since the buffalo. I wish the limit was three a day, nine in possession. Not the current four and sixteen. I never looked for a sage grouse this September. I do love their country. 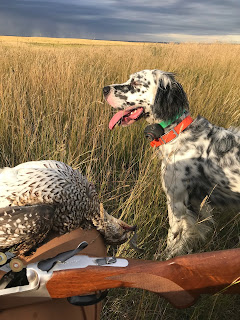 A trip to the grouse shack in Minnesota was enjoyable, despite record rainfall there this summer/fall.  The forest floor was literally one third under water. The poor woodcock were limited in options too. Alders? Underwater.  River banks?  Heavy flow.  We did move a few in young popple and fern/jackpine habitat, but very few.  Letti the pup, did terribly on Timberdoodles for whatever reason. If she was only focusing on ruffs, well, she was successful.  Grouse numbers were surprisingly solid and almost out of whack with the 10-year cycle.  Oh, the Runners. I think ruffs have been in cahoots with pheasants, and are adding that skill to their bag of tricks. I watched a bird run, Letti relocating, numerous times until it finally flushed at 75 yards. What? I have hunted ruffed grouse in Minnesota for 36 years of my 48 and haven’t seen SOBs run like that.


If you haven’t already, hit the road and find the dog some birds.  November is here.

Posted by Hanson at 8:09 PM No comments: