Since the upland season was closed in Montana and there was too much snow in my Idaho haunts, I had to look elsewhere for my bird fix.  This time of year I am fairly busy and I was approaching Madoff type financial waste in hotels, gasoline and nonresident licenses, so I could have easily stayed home. But, when I look at my setters' aging, sad eyes, I couldn't stay home.
It left me with Utah or Wyoming chukars. Wyoming was an easy drive, Utah about a day's drive.  I chose the Cowboy State and got out my maps, hopped on the internet, and devised a plan.  Basically, all of my resources said the same thing: there are chukars scattered throughout the Bighorn Basin. Before you SMH, as the kids say, for my possible hot-spotting, look on a map. The Basin is roughly 10,000 square miles and not all of it screams chukars. In fact, in two January trips there, I spent equal time driving as I did hunting.  It took me quite awhile to realize that the Idaho/Oregon chukar habitat that I was looking for, doesn't really exist in Wyoming.  Instead of looking for 45 degrees slopes which rose from large watersheds, I was settling for gradual ridges, with occasional stock tanks and creeks that probably were dry most of the summer.  Cheatgrass was still present, as were scattered sage brush and rocky knobs which we chukar hunters have seen chukars scamper over in our dreams.

I saw just enough birds to give me that fire of wanting more.  I won't give Wyoming a 10 out of 10 for chukar habitat or upland hunting in general. Sure there are pockets of great pheasant hunting, healthy numbers of sage grouse and good mountain grouse hunting. But, overall there is a lifetime of arid range land that requires a lot of sifting through.  I don't mind walking miles between coveys of Huns or chukars.  But, if one is having more dry runs than fruitful walks, you begin to question if this is the best use of your time and your dogs' paws.   The birds I shot were in far corners of the Basin, in some fairly nondescript habitat. Now, as February sets in, I won't have another chance to explore and learn more until next season.  Maybe I head to Utah next weekend. That season does remain open until February 15th........ 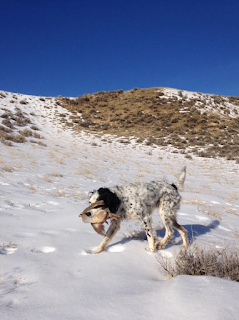