Just A Taste Of It

I had originally planned to head west for chukars when things started to wind down in Montana.  Those "things" included upland birds in Montana, like Huns, sharptail and pheasants.  Why leave birds to find birds, right? (see previous post on ruffed grouse) I also consider myself an occasional big game hunter, but mostly for the privilege of having deer or elk meat in the freezer.  Horns, not so important to me.  As you probably know. the dogs would prefer that I only hunted things with wings.

Well, I have never been great at delayed gratification.  My alibis were: 1) there wasn't enough snow to really track elk in the mountains of central Montana and 2) there would be plenty of time to shoot a deer over Thanksgiving weekend.  I also wanted to get to Idaho before snows would hinder my chukar hunting amidst the steep terrain.  Out of four trips to hunt chukars the previous fall, I hunted in substantial snow in three of them.  It wasn't a complete barrier to success, but the snow did add a bit of extra effort and danger to the hiking.

The trip for me was a solo one, which was fine.  When it came to chukar hunting, I had learned that it really wasn't for everyone.  The days were long, the miles were hard and the shooting was quite challenging.  When I am alone, I don't mind exploring new ground, with the possibility of completely striking out.  My Dad had the same philosophy for years, as he searched for the holy grail of ruffed grouse coverts, much to the benefit of others.  Now I can return the favor and get my hunting partners into birds with more consistency.

Some things never change, as I had ice-covered highways to travel over and there was even some snow on the chukar hills when I arrived. But, by the end of the first day of hunting, most of the snow had melted or disappeared via sublimation.  It was a fruitful trip overall, as I had found some birds in a new location and crossed off one possible chukar hotspot from the list, as the cover was sparse and we didn't put up any birds.  I made sure the dogs got into plenty of birds before the trip wrapped up as we hunted known milk runs where the only disappointment was my shooting. 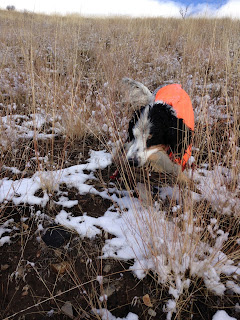 Overall, it didn't do much for whetting my chukar appetite. Now I just need this deer and elk hunting to wrap up. 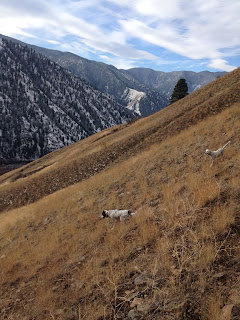 The trip to Dad's grouse camp in northern MN is always a bit of a 180 from the Montana upland scene. His camp is a speck of private ground, amidst thousands of acres of public land.  Hence, there is no begging for access, no worry about fence lines and property lines, and very little competition.  This is where I grew up, where my Dad and I have spent 30 years of weekends and holidays.  Dad has pages of detailed hunting journals and his own records of drumming counts and grouse cycle statistics.  In other words, this is our home arena. 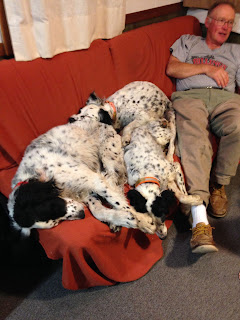 The dogs also seem to enjoy the chance of pace.  They get to sleep by a wood stove, they eat table scraps that would feed some entire families and the ground is fairly forgiving, moist and shady, compared to rocky and rugged in Montana.  There are very few stickers and burrs to bury themselves in the long setter fur, no rattlesnakes or cactus to worry about. Wolves are my biggest concern and with gunshots, beeper collars and some loud voices, the odds are slim that one will have an encounter.

We seem to have missed the major woodcocks flights, but encountered a few each day.  Grouse were up slightly from 2014 (5% up according to the grouse professor). The dog work was good; many prairie dogs struggle with pace and range in the northern grouse woods, but with dogs that are both in their twilight, they worked at just the right cadence.

The negatives will haunt me for a year, until I return to Minnesota.  It was actually just one negative: my shooting.  I can still see Tess on point, on the edge between scattered popple and a expansive cedar swamp. As Tess was locked up, I prepared myself for a shot, but stepping into a clearing and onto a slight mound.  Not one grouse rose, but two, giving the grouse hunter a rare, very rare, true double on ruffed grouse.  Boom Boom.  I choked.  I rushed my shot on the first bird and then in a panic, missed the second also. No excuses.  This wasn't my first hunt in the woods. I spent more time in those woods than should have been allowed. If this was hockey, I would have been benched.

It wasn't the only miss or screw-up that I recall from that trip either. Is my hearing fading? If you can't hear a bird flush immediately, you are giving that bird a huge advantage. My reflexes? I hope not. I can still beat my Mom in tennis. Maybe.  Then again,  is no more challenging bird to get a bead on than a fast-flying grouse in thick cover.  Maybe I am just forgetting that detail.  A pheasant or sharptail is not very sporty over a point, compared to ruffs. Woodcock are even a notch below ruffs, especially when the leaves are mostly gone from the landscape. I also had two reloads that didn't fire.  That is also maddening, when you consider you drive 12 hours and might get six to twelve opportunities on grouse per day.  I also spent too much time trying to get video this trip as well.  Attempting to get a dog on a point, a bird flying and a subsequent clean kill on camera, is as tough as it gets in the world of cinematography.  But, my footage of the dogs, hunters and camp shenanigans are priceless.

Great trip overall, one that makes me appreciate where I grew up, how I was raised, and every dog that I have shared those favorite coverts with. 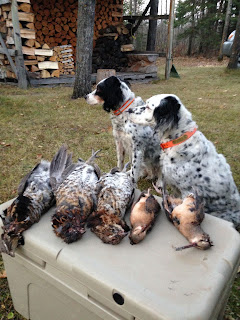 Posted by Hanson at 6:38 PM No comments: 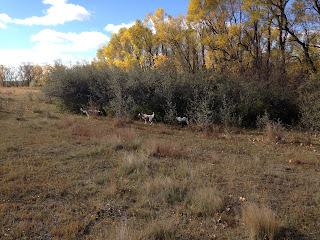 What is it about pheasants? Why do hunters pack one-star motels and race down gravel roads to beat other hunters to their pre-determined location?  Heck, at some lodges in South Dakota, folks spend hundreds of dollars a day to shoot three birds.  Often over someone else’s dogs. Hunters simply get crazy about pheasants.

I was part of the chaos and have been for over 20 years.  As I left town the Friday before opener, every dog kennel in truck beds that I saw headed to pheasant country, gave me some angst.  Seeing personalized license plates that read POYNTR, HNTMUP, RNGNEK, didn’t help either.

But, as it has for many others, it is often about tradition more than the hunting.  The same hunting partners, the same rooster honey holes and the same corny jokes during lunch. “Never have we ever seen a guy miss a rooster over a point!” or "I don't shoot the juveniles, that was the new guy." The only things that change over time are the dogs, unfortunately.

Once again, I woke up Saturday morning before the alarm. I grabbed my coffee cup and told Ryan and Kale to meet me at The Spot.  Sitting in the truck, for 45 minutes before dawn, I questioned my sanity, vowing to not do it again next year. I mean it this time. The Spot isn’t typically loaded with birds, but it is good enough.  And it was again.  We had our limit of nine birds, with a lot of help from experienced dogs that ranged in age from six to 12.  And, by golly, someone did miss a bird over a point. And to the Holier-Than-Thou types that like to respond with, "Bird hunting shouldn't be about limits", well I agree. Except for pheasant opener. It is often about limits. Even tailgate photos.  Sorry.  If I see someone one hunting at 4PM on pheasant opener, they are either a poor shot or are breaking the rules and are working on limit #2.  Or they really overslept.

By day three, when birds were running, some running ahead and flushing wild, things got sporty. And when an experienced dog plays the game of chase, point, chase, point and you are able to keep up to get a shot at that crafty rooster, then there is a sense of gamesmanship and great appreciation for just how good a dog’s nose is.  That is hunting, not just shooting ,like opening day was.

The only negatives this pheasant opener were extreme winds, (gusts to 50 mph on that Sunday) and the loss of CRP, which has reduced the amount of bird habitat by over 50% the past three years.  The glory days of Montana pheasant hunting might be over, but they are still good to enough to get up really early for, just to get your spot, one last time. 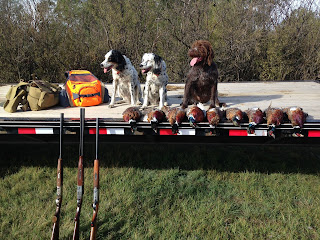 Posted by Hanson at 8:23 PM No comments: