Not Another Sad Dog Story - I Promise

I have read enough dog memorials and other reflections on the painful loss of a hunting dog that I choose to skip them, if I am tipped off. It isn't out of a lack of compassion or empathy for a fellow hunter, but more of a defensive mechanism on my part.  I have lost many dogs and it is always difficult. For the majority of us who do not have kennel-only dogs, but dogs that are at our side day and night, the loss is definitely similar to losing a family member.

Losing Abby was sad, but there was plenty of celebration and appreciation along with her death.  Abby also died while hunting, an apparent heart attack, just ten minutes into a morning walk for sharptail in central Montana.  She literally tipped over mid-stride and did not suffer at all.  We all have had hunting dogs that have endured a long illness, gradually losing function and quality of life. Decisions around those illnesses are much more difficult and often delayed. How many of us would prefer to pass away while doing something we truly love?

On the drive home, I assumed that the next step was cremation, which I had done with previous setters whose time had come. But, when my mind was pondering on where I should spread her ashes, the options were nearly limitless, complicating my decision.  Abby, and her older sister Tess, had shared hundreds of days afield with me, in many locations.  Blue grouse, sharptail, pheasants, sage grouse and Hungarians in Montana, grouse and woodcock in Minnesota, quail in Kansas, chukars in Idaho and Wyoming and ptarmigan in Colorado.  Abby and I averaged about 45 days each fall together, often sharing a bed and a corn dog on the ride home.  I decided that I would bury Abby on my property, under a Ponderosa tree, allowing me to visit her grave in perpetuity.

Abby was a quirky little girl.  She pointed shadows and bugs on the wall. But, she was steady on point, so why mess with that?  Abby also had a fairly annoying habit of carrying shoes around the house, which was a pain when you wanted to leave in a hurry, but were missing one shoe.  Again, she was the best retrieving setter I have had, so what the heck.

Abby was 11, which is on the older end of the spectrum for a hunting dog. But, she was the younger of my two setter girls, so I was leaning on her to be my primary hunting companion this fall. She was showing some signs of slowing down this September, especially on long, tough climbs for blue grouse. I blamed a lot of her sluggishness on the unusually warm weather, but now I know the problem ran deeper.  Her last bird was a blue grouse that she pointed for me in the Little Belt Mountains.  That is another reason that this tale is not sad, but a celebration of a bird dog's life.  Her greatest passion was the same as mine: hunting wild birds in wild places. Abby had a great life.  Nothing sad about that. 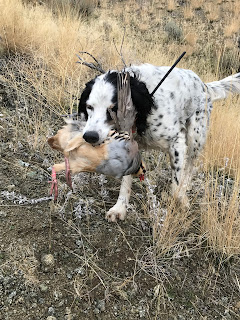