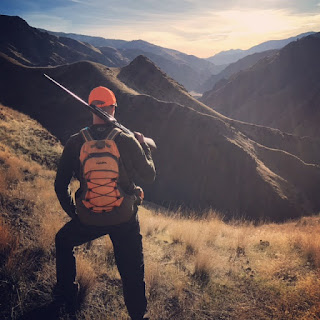 I have muttered these words under my breath more than once this fall. Due to complexities at home(a baby boy September 30th, an unexpected passing of my younger dog and my new setter pup being adopted by my father due to reason #1) I found myself with very limited dog power come early October. Tess, the 13 year-old setter has been limping along, having been diagnosed with lymphoma and has good days and bad days.  I have shot a few "last birds" over her, including blue grouse, ruffs, Huns, pheasants and sharptail.  If she doesn't wake up tomorrow morning, her final season has been blessed.

I  should be old enough to not allow emotion to trump practicality.  Driving eight hours with a 13 year-old setter to hunt chukars in the most rugged uplands in the US? That makes no sense.  But, like we always do, we justify our bogus decisions with alternative facts.  People can travel for hiking trips, right?  The weather is abnormally nice for November.   I can get into chukars by simply walking farther and faster, even if Tess is unable to perform. Sure.

Bird hunters rarely arrive in a new area and find instant success with a covey behind every turn. In fact, we often find ourselves driving around with maps and a GPS, hunting for a spot to hunt.  This expedition was no different and finally by 9AM, we were headed uphill. It wasn't quite T-shirt weather, but I have learned to avoid overdressing on the ascent, so we had stripped down to our baselayers.  Tess was with me on this maiden voyage and seemed to be fairing alright as we went up one ridge and down another.  Unfortunately, we didn't move any birds in this first five mile up and down and Tess was finished for the day.

You don't drive across two states to only hunt three hours and sit in a bar watching football.  And, I wanted to be in this country. I needed to feel the burn and see the views.  Like any other addiction, I had to catch those darn chukars on top. Chase them up to the ridges and be lucky enough to find a few in range as I wipe the sweat from my brow. Not having a dog on the ground would be different, but not impossible.

You know how the story ends. Birds flush at inopportune times, when one isn't ready. And in chukar country, that time is often.  Instead of going where a dog's nose leads you, the simple path of least resistance is taken.  Even with a dog, we never know how many birds we pass by when hunting big country of the West. Without a dog, that number increases tenfold. Maybe more.  The phrase, A Walk With A Shotgun comes to mind. My Dad's description of "free exercise", also is applicable when a hunt is nearly fruitless.

But, perhaps the worst aspect of hunting without a dog, bordering on unethical, is when recovering game.  I watched my partner, an energetic fellow who was on a mission to shoot his first wild chukar, wing a bird at 40 yards below him. I did my best to hustle over and play the role of retriever, but without any easy path to him, I wasn't much help immediately. We searched for over 30 minutes, working various figure-eights around his cap, but to no avail.  Silence overcame both of us, knowing that while one bird doesn't not equal extinction of the species, but it sure felt like it. Keenan was upset and I should have known better.  The odds of a well-trained dog finding the bird are high.

Denny Green, the late football coach had a classic line years ago when he tersely stated, "They are who we thought they were!" Well, bird dogs are what we know they are.  Irreplaceable in the field and without them, we are really just going through the motions.