Yes, I Am Seeing Somebody Else

900 miles on the road, three nights in a motel, 7 hours of hunting. If you do the cost/benefit analysis, it would prove to be a poor choice of a New Year's weekend, both fiscally and time-wise.  But, I would do it again in a heartbeat.  In fact, I spent the past two evenings, studying maps of chukar ground in Wyoming and Utah.  Oregon is too far, Montana numbers too spotty to expect a good hunt.  My wife thinks I am nuts, but in a cute way.  I think.

Speaking of the Mrs., she finally came with me this past trip to Idaho.  She didn't explain herself, but I am quite sure it was to check up on on me.  Seven trips to chukar country the past couple of years, often by myself,  all in wintry weather, without a full limit of eight birds ever captured.  Something was amiss.  So, when she said she was coming along to check things out in this state that was suddenly better than Montana, I had to accommodate her.

Leaving at 6AM, the morning after New Year's hijinks was the first test. And she was ready to go, without a complaint. Freezing fog in Butte made for some white-knuckle driving conditions, but she kept the faith.  When the Toyota's console read -20 below at the mountain pass on the border, she simply said, "This is too cold to hunt, right?"

Overall, the hunting trip was a compromise.  We wined and dined, did a lot of hot-tubbing and hot-springing and did some hiking.  My hiking with guns and dogs was limited to about two hours a day.  Some of it was fairly difficult. Almost dumb.  I looked hard for south-facing slopes and tried to pattern the birds based on snow depth, maximum sun exposure and food.  That equation was more complex too, as I found some birds on the canyon roads, some at the top of the mountain in 18" of snow.  The latter birds I really felt sorry for as I could almost run them down in the fluffy powder. My setters also had to work harder than normal, but our days were short. 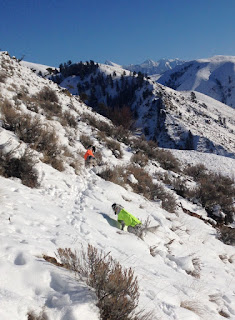 When I wrapped up the hunt Sunday, I felt it was time to admit the season was over.  Laura had tagged along, pretended she enjoyed seeing what it was like on the chukar mountain and took some video.  But, it was more work staying upright than it should have been.  Now, less than a week later, I am not so sure.  If my dogs and I all get a vote, it is probably unanimous that I study those maps a little more. 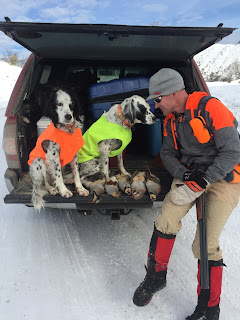